Discover the 8 largest swimming pools in the world At a time when infinity pools have definitely come into fashion, meet the record-breaking pools for luxury, size and extravagance.

The recent opening of Sky Pool, a sky pool made of transparent acrylic, suspended between two blocks of luxury buildings in South London, has reminded us that pools are much more than just a space to swim and dive. Today, pools compete for their architectural extravagance, their infinity views, their sustainability and water purity, and also their size.

Related Article: Who said that Porto is not a city for surfing?

If you are thinking of buying a house in Portugal and are considering a pool in your garden, get inspired by this list to make your decisions: it reveals the eight largest pools in the world, all with crystal-clear water, white sand, endless horizon and room for everyone. Europe is under-represented in this index, but think what your pool with sea view might look like, in a villa in the Algarve or even in Porto. It will never be the biggest in the world, but it could be the biggest change of your life. For the better.

The largest pool in the world is in Egypt and has the advantage of being ecologically unassailable. The Crystal Lagoon covers more than 120,000 square metres and features proudly in the infamous Guinness Book of Records. The white sand that frames it is 27 times the size of a football pitch. The pool is part of the luxury resort in Sharm-el-Sheikh, a city located between the Sinai Peninsula and the Red Sea. The project has 12 other artificial lagoons in an area spanning 750 hectares. It could be the largest pool in the world and not be particularly beautiful, but it is gorgeous. 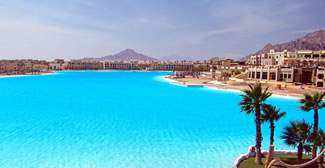 Inaugurated in 1988, after five years of construction, the San Alfonso del Mar pool in Chile disputes with Crystal Lagoon in Egypt for the status of the largest pool in the world. Located about a hundred kilometres away from Santiago, the country's capital, it is about 20 times larger than an Olympic-size pool and holds 250 million litres of salt water, three metres deep. Visually, it imitates the beaches of the Valparaíso region, but the water is much warmer. Contrary to what many people think, it is not located in a resort but in a residential condominium. The length of the MahaSamutr pool in the city of Hua Hin, south of Bangkok, is equivalent to eight football stadiums, or 67,000 m2. The pool is properly integrated into a luxury resort with access to purified water. Its added value lies not so much in its size but in its perfect imitation of the beaches and natural beauty of that Asian region. Surrounded by sand from the beach, this pool also allows the practice of some water sports and activities, such as the use of kayaks and catamarans, as well as living by the sea all year round. It's easy to see that Chile has some of the most extraordinary pools in the world. Even if it seems much smaller when compared to other pools on this list, Las Brisas, with crystal blue water, integrated in a luxury condominium in the city of Santo Domingo, covers the distance of 16 Olympic swimming pools. Something like 20,000 square metres of salty, treated water. Facing the Pacific Ocean, Las Brisas belongs to that category of "pool on the beach", since you don't know where one begins and the other ends. Still in Chile, Laguna Bahia, located less than a kilometre away from the San Alfonso Del Mar pool, occupies 14,000 square metres of a luxury resort. Not looking big in this championship of giant pools, it is big enough to allow sports such as surfing, kayaking, windsurfing or stand up paddle. Unlike the previous pools, Sands Skypark does not mimic natural beaches. Rather, it is located on top of a 57-storey building. In fact, it is the top floor of the Marina Bay Sands Hotel. It is the size of three Olympic-sized swimming pools and has one of the most impactful views in the world. From there you can see the entire city of Singapore. Opened in 2008, inside a resort situated on the outskirts of the populous city of Karachi, right on the shores of the Arabian Sea, Dreamworld Fun Lagoon is the world's largest freshwater swimming pool. It can hold approximately 7.5 million litres of water. And, right next door, it still benefits from an artificial sea, with waves of up to four thousand feet.

It is the only European presence on this list, but it is no less relevant for that. Alfred-Nakache, located in Toulouse in the South of France, has the particularity of being a municipal swimming pool. It was built by the architect Jean Montariol in 1931 and was classified as a historic monument in 1993. It is considered to be the largest open-air swimming pool in the country. Related Article: Praia da Falésia is one of the 25 best beaches in the world